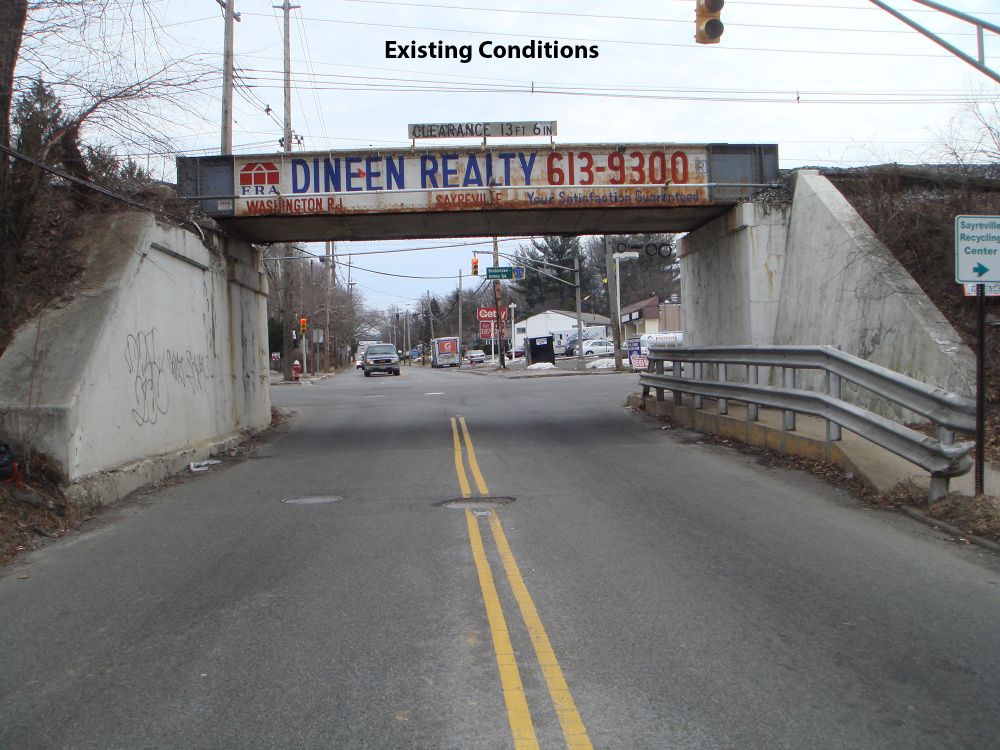 NJ Society of Municipal Engineers
Project of the Year Award

PROJECT HISTORY:
When appointed Municipal Engineer of the Borough of Sayreville, Middlesex County, N.J. in March of 1984, David J. Samuel was faced with a variety of challenges. Like many towns in New Jersey in the early to mid 1980's Sayreville was growing. What was once a humbly populated, blue collar community thriving from local major industries, this small but proud Borough was in the midst of change.

Locally known as Bordentown Avenue, this roadway along with Ernston Road are both under jurisdiction of Middlesex County. Three quarters of the intersection is located within the Borough with the remaining quarter located in the neighboring Township of Old Bridge. Both roadways were two lane roadways and had a width of approximately 30 feet. Located at the northwest corner of the intersection and parallel to Bordentown Avenue is a Conrail freight train overpass located on a bridge that had a width of 50 feet and a height of 13.5' feet. The bridge was affectionately referred to as the "Hole in the Wall"

The intersection dates back well over one hundred years, and until the late 1960's served the area well. However as the population of the Borough of Sayreville and the surrounding communities began to grow, so did the traffic at this intersection. The existing "narrow" intersection consisted of a single lane traffic movement through each leg of the intersection. Therefore the wait to turn left at any leg would backup all traffic behind the turning vehicle. Therefore once again, newly appointed Municipal Engineer David Samuel was asked to address the problem. On behalf of his Municipality, Mr. Samuel initiated discussions with Middlesex County officials in an attempt to prioritize the improvements of this intersection.

UNIQUE OR UNUSUAL DESIGN FEATURES:
• NEVER GAVE UP ON THE BOROUGHS GOAL ON IMPROVING THE NARROW, SINGLE LANE, HEAVILY TRAVELLED INTERSECTION
• PROVIDED OVER 25 YEARS OF ASSISTANCE WITHIN EVERY ASPECT OF INTERGOVERNMENTAL COOPERATION IN ORDER TO BRING THE PROJECT TO FRUITION
• INTERSECTION DESIGNED AND CONSTRUCTED AT NO COST TO BOROUGH TAXPAYERS
• KEPT DISRUPTIONS TO AFFECTED "DETOUR ZONE" BOROUGH BUSINESSES AND ORGANIZATIONS TO A MINIMUM

THE RESULT:
Since the completion of the project, about 10,000 daily motorists travel swiftly through the intersection each day. Half mile long traffic delays are history, and nobody really misses the old "Hole in the Wall". They might not ever realize the "never give up" attitude it took their Municipal Engineer seeing this project through fruition. Through the Intergovernmental Cooperation of the Borough of Sayreville, The Township of Old Bridge, The County of Middlesex, The State of New Jersey, Conrail and the Federal Government, this project has demonstrated the strength of teamwork and leadership.