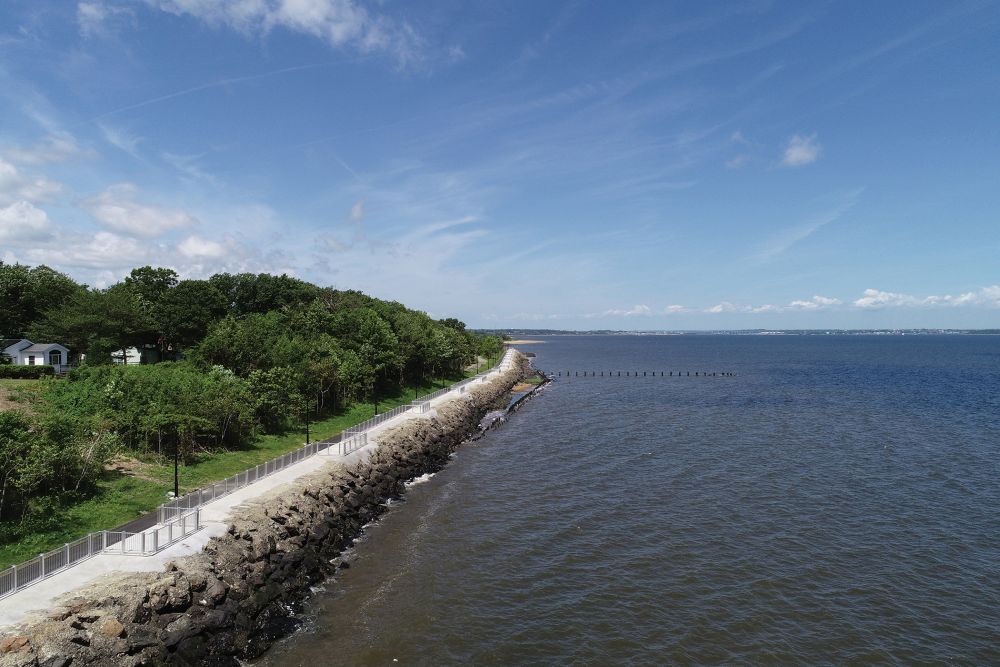 A substantial and structurally sound seawall was constructed under the direction of the Army Corps of Engineers in 1973. The top of this sea wall is approximately 20 feet above mean sea (bay) level, and spans for over 3,500 feet from Lakeshore Drive to Beach Drive.

In 2010, Aberdeen Township, looking to recapture some if its' former glory along the Raritan Bay, decided to provide Aberdeen residents with a passive pathway built along the top of the seawall. The Township constructed approximately one-half mile of concrete walk with railing atop the seawall for residents to be able to enjoy the bay breezes and majestic scenery. Unfortunately, soon after its completion, Superstorm Sandy struck in 2012, damaging the railing and concrete path to the point that significant repairs would need to take place prior to the public being able to use the walkway again.

This time, unlike in 1960 with Hurricane Donna, Aberdeen Township didn't hesitate to take action. Township Engineer, David J. Samuel was directed to evaluate the damaged path and to design a new pathway with additional features including site lighting, fishing outcrops and concrete bench pads in order to take advantage of the Raritan Bay area amenities.

CLIENT REQUIREMENTS:
• PROVIDE A WALKING TRAIL FOR THE RESIDENTS OF ABERDEEN THAT ALSO CAN BE UTILIZED FOR RECREATIONAL FISHING
• PROVIDE LIGHTING ALONG THE TRAIL FOR SECURITY PURPOSES
• PROVIDE DESIGNATED AREAS FOR FISHING AND BENCH PADS FOR FUTURE BENCH DEDICATIONS
• CLOSE UP THE EXISTING ACCESS AREA THAT WAS SUSPECTED OF ALLOWING STORM SURGE INTO THE RESIDENTIAL AREA DURING SUPERSTORM SANDY BUT ALSO PROVIDE ACCESS THAT WOULD ALLOW A CONTINUOUS DUNE FOR FLOOD PROTECTION
• PROVIDE A SMALL GAZEBO OVERLOOKING THE RARITAN BAY

UNIQUE OR UNUSUAL DESIGN FEATURES:
• APPROXIMATELY 2700' OF ASPHALT TRAIL WITH 16 BENCH PAD LOCATIONS AND 10 FISHING OUTCROPS THROUGHOUT THE LENGTH OF THE TRAIL
• CONSTRUCTION OF AN 8' DIAMETER GAZEBO OVERLOOKING THE RARITAN BAY
• DESIGN A LIGHTING PLAN THAT WOULD RESIST WIND AND WAVE ACTION AS WELL AS PROVIDE WATERTIGHT JUNCTION BOXES AND CONDUIT
• PROVIDE AN ADA ACCESSIBLE ENTRANCE WHILE CLOSING THE EXISTING ENTRANCE IN ORDER TO PROVIDE CONTINUOUS DUNE PROTECTION
• PROVIDE A RECREATIONAL PATHWAY WHILE ALSO HELPING TO PROTECT THE BACKSIDE OF THE EXISTING SEAWALL FROM SCOUR AND WAVE ACTION
• ACQUIRE COASTAL GENERAL PERMIT 13 AS WELL AS OBTAIN A TIDELANDS LICENSE FOR THE PROPERTY

THE RESULT:
What was once a damaged passive walkway atop the seawall is now a bustling trail with fishing outcrops for the local fisherman, bench locations for reading or daydreaming, and a gazebo location that allows residents to relax in shade and gaze out into the Raritan Bay.

Aberdeen Township is committed to providing recreational resources to its residents, and to the public at large. With the successful completion of the Raritan Bay Asphalt Trail, passive recreation at this venue met these goals and will be enjoyed for years to come