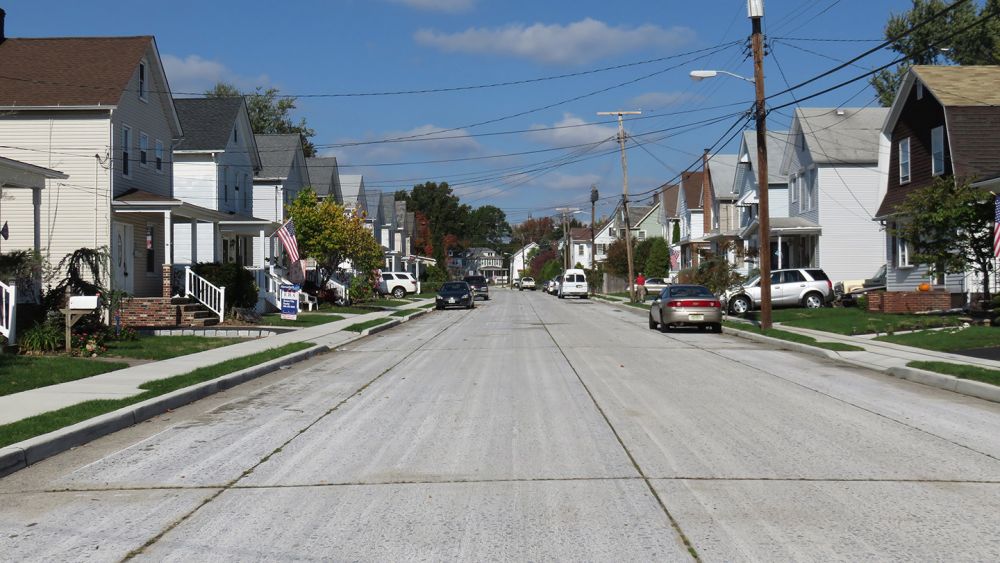 NJ Society of Municpal Engineers
Project of the Year Award

The Borough of Milltown originated as a Settlement known as Bergen's Mill which was established around a Grist Mill on the Lawrence Brook in the early Nineteenth Century. In the Mid Nineteenth Century, The Industrial Era brought the Meyer Rubber Company to Bergen's Mill and with it a wave of immigrants seeking a new life. The Meyer Rubber Company operated until 1896 and in 1907, the Michelin Rubber Company arrived in the Borough and with it a new wave of immigrants who would work at the factory.

Through these years, neighborhoods and roadway networks were established to house the factory workers and accommodate transportation between the factory and dwellings. The South Street Area is one such neighborhood that was established in close proximity to this Historic Rubber Factory Site. Located in the easterly area of the Borough, the South Street Area roads consist primarily of Portland Cement Concrete Roadways with concrete curbing and intermittent sidewalks throughout.

Recognizing the need for improvements to this Historic Area's roadways system, the Mayor and Borough Council commissioned Borough Engineer Michael J. McClelland to develop a scope for the improvements and to identify funding sources to accomplish the project. The Governing Body as well as neighborhood residents were primarily concerned with the preservation of the concrete roadways and wanted a cost effective method of improving the roadways without the complete replacement of the concrete and/or resurfacing with Hot Mix Asphalt.

CLIENT REQUIREMENTS:
• DEVELOP A SCOPE OF ROADWAY IMPROVEMENTS IN THE HISTORIC SECTION OF THE BOROUGH
• PRESERVE THE EXISTING CONCRETE ROADWAYS
• SEEK ALTERNATIVE FUNDING SOURCES
• KEEP TREE REMOVAL TO A MINIMUM
• DO PROJECT IN A COST EFFECTIVE MANOR

UNIQUE OR UNUSUAL DESIGN FEATURES:
• RESEARCHED AVAILABLE CONCRETE ROADWAY REHABILITATION TECHNIQUES
• UTILIZED "DIAMOND GRINDING" CONCRETE PAVEMENT TECHNIQUE
• REVIEW HISTORIC AREA OF BOROUGH AND DEVELOP A LONG RANGE PLAN OF IMPROVEMENTS TO ULTIMATELY IMPROVE ALL OF THE STREETS IN THE AREA
• OBTAIN NJDOT MUNICIPAL AID GRANT ALLOTMENTS FOR THE FIRST PHASE OF THE PROJECT
• UTILIZE CONCRETE THAT STRENGTHENS IN AN ACCELERATED FASHION
• DESIGN AND CONSTRUCT BARRIER FREE ACCESS WITHIN THE CONFINES
OF THE EXISTING ROADWAY
• RESEARCH AND INSTALL TREES THAT FLOURISH WITHIN THE CONFINES OF THE NEIGHBORHOOD AND WOULD REQUIRE LIMITED FUTURE MAINTENANCE

THE RESULT:
Building on the success of the project, the Governing Body authorized Mr. McClelland to continue to seek funding to advance the improvements of this Historic Area of the Borough. As a result of Mr. McClelland's efforts, the Borough has now received an additional $360,000.00 in NJDOT Municipal Aid Funding towards the next phase of the project and the design of the next phase of this critical project is now underway.